Read more about how Seen could help you

60% of those that watched the film referred at least one friend.

In this five-film project we set out to help Manchester United Supporters Club Scandinavia identify as many United fans across Scandinavia as possible.

The project was initiated with a personalised video that was sent out to the club’s existing members (as featured above). The main objective of the first film was to encourage the recipients to recruit their friends. This referral-centric strategy enabled us to create a broad ecosystem consisting of four additional films – all of which were set up to be programmatically tailored to each of the individual recipients and their current position in the overall journey.

By integrating with our API, Manchester United Supporter Club Scandinavia’s own CRM-data is what instructs the creation as well as distribution of each of these data-driven, personalised videos.

If you happen to be a Manchester United fan we recommend that you try out it out yourself on united.no – especially much so if you also happen to be interested in personalised messaging, customer journeys & marketing automation. 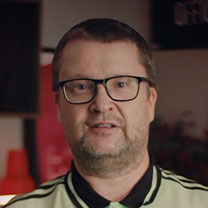 This campaign had a massive impact on our recruitment and we got thousands new members and warm contacts to nurture.

Leave a message and we’ll get in touch

By clicking “Accept All”, you agree to the storing of cookies on your device to enhance site navigation, analyze site usage, and assist in our marketing efforts. For more information about cookies used and how we process data, please view our Cookie Policy.

reject allaccept all
Thank you! Your submission has been received!